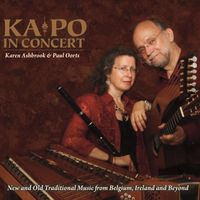 On a trip to Wisconsin’s Door County, we were pleasantly surprised to discover the Wisconsin Belgians. About four thousand settled there in the mid 1800s and gave their towns names like Belgium, Brussels, Namur, and Rosière. To this day the old folks still speak their Walloon dialect and still have the annual Kermiss, but none of their music seems to have been preserved.

When we were invited by the Peninsula Belgian-American Club to come play some "Belgian" music, we put this set together. It consists of three 19th-century dance tunes associated with Habiémont, a small town in Wallonia, the southern part of Belgium.

Maclote, is Walloon for matelote or sailors' dance, but the term became generic for any contradance. The Allemande has a long history as a type of dance, not just as a figure in square or contradancing. This one was originally in 6/8, but Paul folk-processed it to 2/4. The Amoureuse, which starts with Karen using her mallets as sticks, used to be sung with these words:

Ah, why am I loved by a young and pretty German girl?
I haven't given her anything, yet my heart is tormented.
My father doesn't want me to love her; my mother says I'll forget her,
But my smitten heart beats only for her, and I faithfully wait for her.